Cycling is an important thing to do in tanks over 5 gallons. It keeps fish safer and healthier, and keeps you from having to work as hard! Ha-cha, cycling is great! Use this guide to help you as you cycle your tank.

Fish-In Cycling at a glance

Alright. To cycle a tank:

I suggest the fish-in cycle when cycling a tank, so long as you have purchased a fish already. If not, do fishless cycling. This takes longer, but it means your betta can live in your tank as you do it.

I used this guide to cycle my tanks the first few times. I feel its one of the better ones out there, if you wish to check it out:
http://www.firsttankguide.net/cycle.php

What cycling is is the nitrogen cycle. This cycle, in essence, is the build-up of bacteria on your filter's cartridge as well as in your substrate and on the decor that begins to eat ammonia. Ammonia is harmful to fish and most all creatures, especially since its in their water and they cant get away from it!

Once these bacteria begin to develop (after a few days, from the air), they begin to build up and grow. You need to allow them to establish. This means they need a steady supply of ammonia (which is given by your fish's waste and food), but needs to be monitored to make sure it never goes above .5ppm! 1ppm will kill your fish and .5ppm for too long is stressful and unsafe. You can find out the readings using a liquid! testing kit. Strips are not accurate enough and are more expensive in the long run. 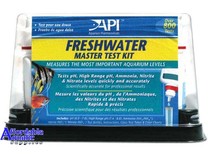 They have a kit for just ammonia like this:
http://www.petsmart.com/product/inde...ductId=2754009
This is a great testing kit, but it only has ammonia.

You also need to be able to check nitrate and nitrite, which can be found in this kit (along with an ammonia test and others): http://www.petsmart.com/product/inde...ductId=2754034

Unfortunately, these are kind of expensive. All testing kits are, though! 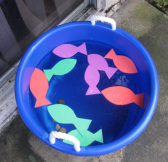 When you test your water (which, with one fish in a 5gallon, I would do every other day or so), you don't need to change the water when at or under .25ppm.

Put water conditioner in before adding new water in to avoid killing bacteria. If its still too high, do another, smaller water change.

Dont do 100% water changes while cycling a tank, though! Also, dont allow the ammonia to go to 0 unless you have live plants, because having no ammonia in the tank because you've done too many water changes is starves the bacteria.

You must, in order to not kill the beneficial bacteria, put the water conditioner in the new water before you put the water into the tank! Its important.
(Invest in the $2 blue buckets at walmart for this (LOL!))
Over time, the bacteria will begin to convert the ammonia to an equally harmful compound called nitrites (notice the i!)

Its just as bad, but it means youre getting there. When they begin to develop, your ammonia will begin to go down. To eliminate them and lower their levels, do much the same as you did with water changes. Essentially keep the same schedule and keep monitoring.You will need a master kit or at least a nitrate/nitrite testing kit for this.

After a while, your nitrites will begin to go down and ammonia will be almost non existent or at 0. Wooooo! Get excited. You might have trace amounts of nitrates (note the a!) which is what you want!

Nitrates are not good in high amounts, but they take longer to build up than the other two and are less deadly for longer periods of time. They develop slowly and allow your tank to need much less frequent changes than before.

Nitrate shouldnt go above 20ppm. Change the water when its near 15ppm, again not too much- try for 25-50%. Retest if you want to make sure things are low enough.

Its important while cycling that you do not do any 100% changes or over-vacuum the bottom of the tank/gravel. Doing these will get rid of all the ammonia your tank needs to keep the bacteria fed and over vacuuming will suck up too much bacteria, while the cycle is still getting going.

You shouldn't rinse the substrate/gravel or the filter cartridge. Especially the cartridge, as it will completely, 100% ruin the cycle. It will get gunky, but just rinse in old tank water that you remove from a water change. You really don't even have to do this, unless its getting gross.

Make sure the water you're putting in the tank after a water change is around the same temp as the tank's water, if you leave the fish in. Be careful if you do, so that you don't suck up the fish with your siphon.

I use a similar siphon to this, minus the "vacuum" part:
http://www.petsmart.com/product/inde...ductId=2752298 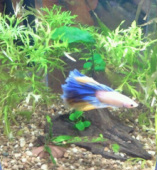 Using live plants, especially stemmed plants like anacharis, water wisteria, moneywort, penny wort, water sprite, ludwigia and hornwort, will increase the cycle speed and lessen the need for water changes during the process, as it eats up excess ammonia, keeping your tank safer. If you can, try and get a few live plants. All of the above are easy and usually not expensive. You can check out more easy plant options in my plant guide.

Images are (c) their respective owners and used with many thanks.