Here are some photos and a few words about my fish- past and present. Enjoy!

Allejandro ("Alle") was the first fish I've had in a very long time. I saved him from a murky, shallow cup in our local Wal*mart.  Alle was a veil tail orange dalmatian with colorful blue eyes. We lost Alle to old age.

Basch was my second betta, a Valentine's day gift from Dan from Aquabid.com. He was a stunning marble butterfly super delta, with a heart shape on his back. I lost Basch to columnaris because I did not know how to treat it at the time. He was one of the reasons I began researching fish care like I did.

Balthier, or "Baller", as we call him, was super sweet, silly and I loved him very much. He was a butterfly halfmoon double tail, with blue and yellow fins and a mostly white body. Baller lost an intense fight with infection and resistant fin rot that he had from when I bought him. I miss him terribly. He was like a cherished child to me and always will be in my heart.

I bought Sved after Alle passed away in a local PetSmart. He was totally white/cream colored when we got him, and marbled into a cornflower blue butterfly with random red lines in his fins atop a platinum body.  Svedka was a Super Delta Butterfly marble.

Mister was from a breeder when he was quite young and is named after his father, Mister. He grew to a much larger, feisty and quite an aggressive boy! Mister was a purple salamander halfmoon plakat with dumbo-esque pectorals. He was a spectacular fish that got me into plakats!

My roommate and I found Ched in a local pet shop in a too-tiny bowl on my birthday. I couldn't bear to leave without him, and was instantly drawn to his silly face and yellow color. Ched was so weak from living in less than a cup of water that he couldn't swim well for weeks and needed to be sedated to correct a mis-aligned jaw so he could eat. Cheddar became a happy, aggressive and handsome yellow VT. He lived a long time considering his terrible start to life, and passed away from old age. 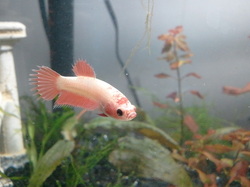 Lady was my first female as well as my first crowntail. She's was lovely red cambodian CT with red on her face. She was sassy and adored her seven ghost shrimp tank mates, especially her best friend forever, "ButtToucher" the shrimp who constantly rubs her antennae against Lady's face and tail. Lady passed away suddenly and without warning after her first birthday. She was my boyfriend's favorite fish, and his "little girl". 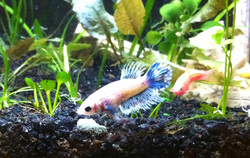 Nemi had a miserable start to life. While in Walmart, I found her at no more than a quarter inch in size, dying in a filthy cup. I bought her out of pity and was dedicated to helping her live. It became clear upon getting Nemi home that she very well may not make it. Over time, this shy and sick fish grew well and blossomed into a friendly, boisterous fish. She is an old lady now, and enjoys her time in my community tank. Nemi is a blue and white dalmatian crowntail. 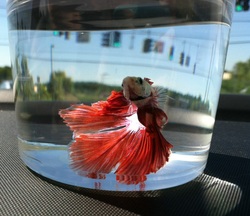 Corbett was recently purchased from Petsmart at the behest of my roommate and boyfriend. He is a red and white dragon halfmoon double tail. He's got a docile personality and is a loveable goof. Sadly, as predicted, his tail (due to its excessive, unnatural size) has become incredibly decrepit and his dragon scaling is beginning to grow over his eyes. He spends his days comfortably in a smaller-sized home to meet his needs. 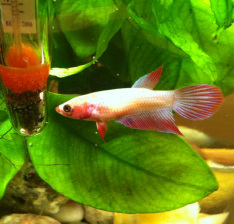 Mason is my newest addition and first VT girl. Despite prettier ladies at Petsmart, Mason claimed my heart with her gentle personality. She is adaptable and docile and currently lives with guppy fry in a planted 5 gallon growout tank. She acts as a guard dog to them and enjoys swimming with them. Mason is a multicolor VT.

Crooks was Dan's second fish. Crookies was from Petsmart, and was chosen for his sweet demeanor and his crooked dorsal fin, hence his name. He was sweet for a while, but became quite the grump! Crooks  passed away due to old age.

Little Man was Dan's first AB fish, and was a pretty silly little fellow.   He was a "Fancy Koi" marble halfmoon plakat. Little had a tumor under his chin that burst and caused him to become septic. While we knew this would happen, we are so glad to have spent as much time with him as we did. He was very, very special.

Allister was a gift to Dan from Aquabid. He was Balthier's brother, though he had one different parent. The two looked very alike! Allister was a multicolor marble halfmoon double tail with blue girzzle. He hugely outlived his brother and died of old age.

Finn was Dan's first mustard gas. Fin was spunky and quite a funny little character.  He had adorable puppy-dog eyes, which is why I called him "Puppy". Finn was a handsome finned blue and yellow mustard gas dragon plakat who passed from old age. 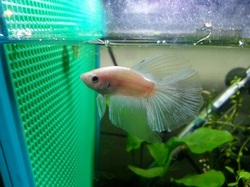 Yuki is Dan's newest fish, and an impulse buy because of how sweet he is. Yuki ("snow boy") is a cellophane white super delta with some red and black on his body, which suggests he may marble. 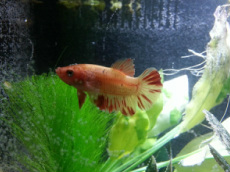 Oliver is Dan's fish dalmatian! He's flirty, coy, and mild. Ollie is a notorious glass surfer who enjoys chasing people who walk by the tank and hamming it up once they stop to say hello. He's an orange dalmatian plakat.

Martin was a bug-eyed multicolor black and red combtail from Petsmart.

Machiavelli was a lavender/pink VT from Walmart.

Volpe was a pink crowntail from Walmart. I forced my poor roommate to get him on a whim and he turned out to be quite a little devil. Volpe relentlessly searched for ways to get around any divider, even if not other fish was on the other side. I housed Volpe in my planted tank for a few months and really liked him.

Bart was a muticolor delta from Petsmart. He was a silly and slightly awkward fish with a good personality.