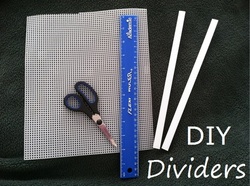 Bettas can't live together directly, but typically do just fine in a divided tank of appropriate size. This guide shows you how to make cheap and effective DIY dividers for a fraction of the cost of pre-made ones, which are often too clear in the center and cause bettas to become angry and stressed at their neighbor's grumpy mug.

Please heed the warnings at the bottom of this guide to ensure your fishs' safety. Despite our hard work and meticulous testing, not all dividers are 100% unpassable!

Firstly, no tank under 5 gallons should ever be divided. It is CRUEL, INHUMANE, and NEEDLESS. This guide does not support dividing tanks under 5 gallons and hopes that you do not use this information to do so, as it is mistreatment.

Dividers are cool, but not for every tank.
- If your tank is under 5 gallons, it should not be divided. Even if you want it to be, it’s not ok! Don’t do it. Things get really bad really fast in under 5 gallons with more than one betta. Even though each fish would "get" xx number of gallons of space in under 5 gallons, that means the space is really tight, and the poor fish can't get away from each other. This is stressful and needless.

But I’ve seen divided 2.5 gallon tanks! 1.25g each!
-That means literally nothing. There are lots of cruel, unethical things out there for sale and that people do. It doesn't make it right.

My tank has a considerable bow front. Is it ok to divide?
- Some tanks are. It gets tricky the more intense the bow. Tanks expressly labeled ”bow front” are often not great for dividing since they’re easy to slip around. Tanks with gentle bows like the Petco 6.6 Bookshelf tank are okay, however.

How many times can I divide a tank?
- Depends on the size. 5g only one divider, 10g one to two dividers max, and so on. Be careful- each fish may get “2+ gallons” when a 10 gallon is divided up, but a skinny little slat of space is not an appropriate home. Don’t over divide your tanks, that’s not fair to the fish. Don’t hoard them just because you can! 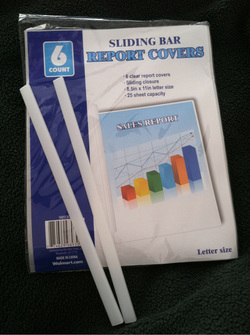 You’re gonna need a few things before making these badboys. To make the dividers, you will need:

3. Measure the width of your tank against your mesh, and make a gentle mark where you want to cut. Please don’t use marker, etc on the mesh. That’s not something you want in your tank! A small nick out of the area does a great job of reminding you where you need to go.
5. Repeat this process again for the height of the tank. You will probably have to cut more later to adjust for the spines, so don't kill yourself over step 4. 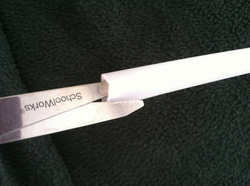 6. Now you need to modify your binder spines, which are what hug the glass and keep the mesh secure. They need to be cut so they fit super snug under the lip of your tank. If they don’t, that could spell issues. You will want to measure many times. This is often trial and error, and that's okay.
They’re hard to cut, so be careful. A good idea is to go into them with scissors and cut along the "side/flap" to help weaken the area you don’t need. It is hardest to cut the back/flat part. Cut along the side, then cross to the back, then the other side to avoid desperately cutting through, which won't really work. 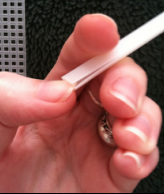 7. Once cut, pry open the spine a little at the end with your nail. Some are very tightly shut, which will make the next steps way harder than needed (re: annoying!). Open it a bit to make it slightly less a pain in the rear. 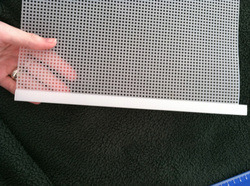 Yours should look more even than this
8. Then, slide the spine over the side of the divider. It may not glide over well at first because it’s new.

*Looks good! Mine has a lot extra on the top because I’m just using whatever I had laying around. I also have no need to make a divider, so I wasn’t cutting or anything. HOWEVER, your mesh should be just as tall as the dividers, give or take a few cm!!!!
If you leave too much space between where the spines meet the lip of the tank and where the mesh is, fish can jump over! :(!!! 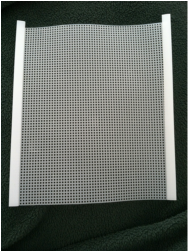 Again, yours should be more even than this
9. Add the other spine. You can add spines at the top and bottom for added support, too. It should look like this when you’re done. Not super fancy, but it’s cheap and works!! 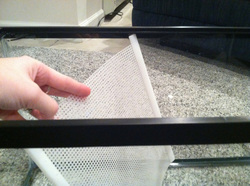 Bring it at an angle to keep it snug
10. It's fittin' time! Bring that bad boy over to the tank to get it fitted and make needed changes!
Sometimes the dividers are too tall or too snug under the lip to go in straight down, so turn your divider to bring it in the tank and on a slant, bring it up under the lid snugly.

*If your divider doesn’t fit even sort of snug under the lip, do it again!!! The snugness is what makes it safe! If not snug, why bother using the spines??? Redo it! 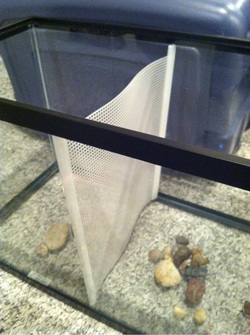 Don't use rocks or this little material, this is an example
11. Once you've fitted (and possibly modified) your divider, and know it fits snugly at all sides, push your gravel up to the sides of the tank, away from the divider. Your divider should be snug enough against the glass and under the lip to stand up. If not, redo or pull the spines slightly out from your mesh (only slightly) to snuggify them.

*I did not have gravel to demonstrate with; I used rocks to show how you'd push you gravel away from the divider here. Don't use rocks like these as its not safe. Don't use this little of material, either!! Marbles, rocks, and gems are not safe enough. 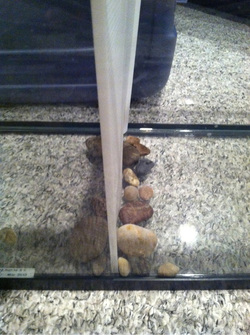 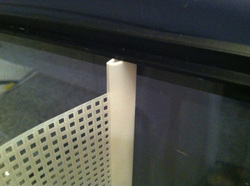 13. Make sure the divider is still snug under the lip! This is A HUGE DEAL! It’s what makes your dividers so strong! Only-mesh dividers are weak in that they can be pushed over or skiddered past by a fish. This prevents just that!! 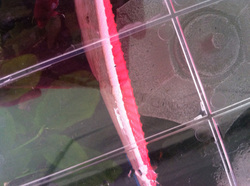 Ex. of mesh bowing from lid being put on: dangerous!
14. Put on your lid, splash guard, etc. and see how it rests on the tank. Make sure nothing bows, buckles, or gets knocked out of place! Adjust accordingly, cut when needed. 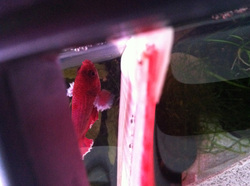 It seems so silly, but when you have two pissed off fish in a tank and that’s a place they see they have clearance, they’ll jump there.
It happens to me! Just keep it closed and it’ll help. 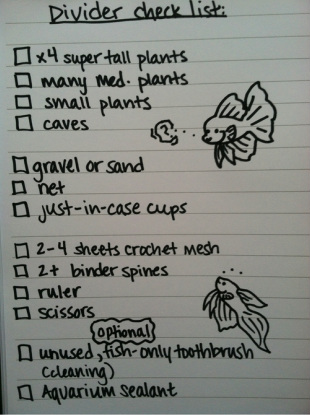